Following from recent promotional boards held at HMGOG Human Resources Department, the Fire and Rescue Service has a new addition to the Senior Management Team and to their Fire Safety Department.

Mr Edgar Ramirez has been promoted to Divisional Officer (DO) – Operations and Training. DO Ramirez joined the service in March 2002 after successfully completing the mandated recruit training course at the Fire Service College in the UK. During his initial years at the GFRS he undertook and successfully passed all his statutory qualifications. In February 2008 he was promoted to Leading Fire Fighter and immediately demonstrated his capabilities as an infectious leader with sound decision making attributes, very swiftly progressing through the rank structure within the Operations Department.

DO Ramirez has also been actively involved in numerous operational improvement projects and is considered a change champion. As Head of Operations and Training he now faces the challenge of leading and ensuring that the performance, competence and operational readiness of the Gibraltar Fire and Rescue Service is maintained at the expected level of professionalism and efficiency in order to safely and effectively serve the citizens of Gibraltar.

Mr Adrian McComb joined the fire service in August 2000 and spent most of his formative years in Red Watch. He was promoted to Leading Fire Fighter in 2009 and transferred to the Fire Safety Department in 2011. He attended an array of courses at the Fire Service College to become a competent Fire Safety officer. These courses included practical fire investigation, fire alarms and emergency lighting, fire safety in non-residential and high risk premises, sprinklers, building regulations and fire engineering principles.

Mr McComb became a Graduate Member of the Institute of Fire Engineers in 2007 and continued to develop further by completing the CIOEH Levels 2 and 3 in Risk Assessments, IFE Level 4 in Civil Emergencies and Disaster Management and the IFE Level 4 in Leadership and Management.

As Station Officer in the Fire Safety department Mr McComb will now be responsible for the management and development of the department’s daily activities involving entertainment and leisure area licences, petroleum licences, community fire safety, events and fireworks, fire hazards and providing fire safety measures for new building projects submitted through the planning and building control process as part of the GFRS ethos of Prevention, Protection and Response.

Chief Fire Officer Colin Ramirez said: Both officers should be incredibly proud of themselves. Two role models that I am sure will inspire others to follow in their footsteps. I want to take this opportunity to congratulate Mr Edgar Ramirez and Mr Adrian McComb for their respective promotions and wish them both the very best as they take on the enormous challenges faced by a modern day Fire and Rescue Service. 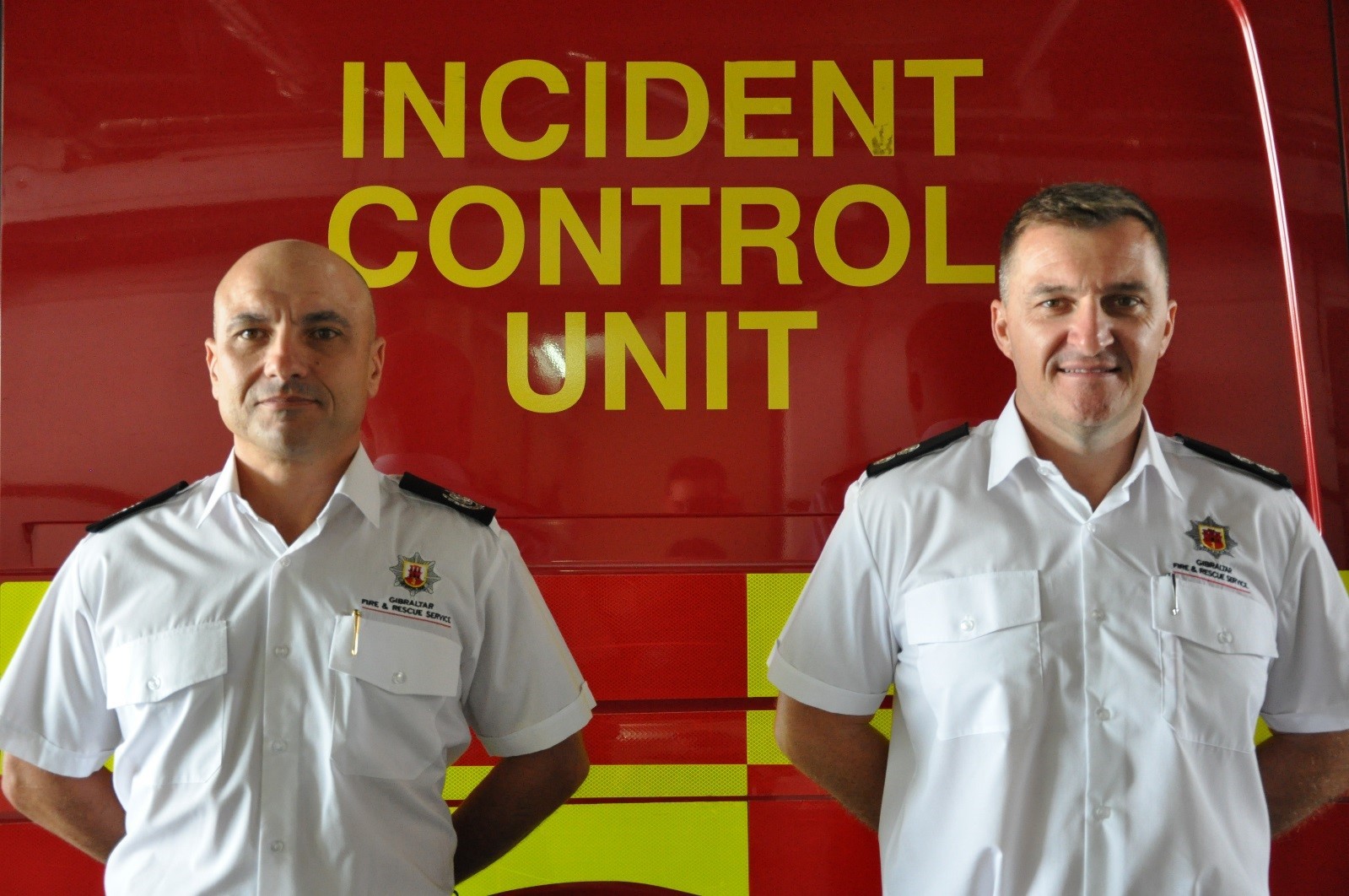