The Minister for Sustainability, Environment and Climate Change John Cortes last week participated in a virtual meeting on Climate Change, in preparation for the Climate Change Summit (COP26) that will be held in Glasgow later this year.  The meeting was organised by the British Embassy in Rome and the Italian Environment Ministry, as the UK and Italy are co-hosts of COP26.

The meeting coincided with the 16th Anniversary of the entry into force of the Kyoto Protocol, the first global agreement on climate change.

The meeting aimed at preparing the groundwork in achieving some of the main aims of COP26, those of encouraging greater action to preserve ecosystems and keep countries, communities and people safe from the impacts of climate change. The theme of the meeting was Nature is about our Earth, adaptation & resilience concern our Future: “One Earth One Future”.

Participants from around the world contributed to the discussion on achieving the following objectives:

One major aim is to reconfigure the way that the economy is defined, with a growing movement to introduce the real value of biodiversity into economic models as set out in the recent Dasgupta Report on the Economics of Biodiversity https://www.gov.uk/government/publications/final-report-the-economics-of-biodiversity-the-dasgupta-review).  Another, which is an extension of this, is implementing nature-based solutions to the climate crisis, by encouraging environmental projects which protect, enhance or restore ecosystems.

Dr Cortes’ contribution centred on the need for the international community in a post-Covid economic crisis to guard against any action which will be detrimental to the environment and to the Climate crisis, and that restoring the world’s economy cannot take precedence over dealing with the climate and biodiversity crises.

John Cortes commented, “Nations around the world will be coming together once again trying to address the global climate and biodiversity crises.  Gibraltar has a contribution to make, and I have the honour to be able to make the case also for island communities in the Caribbean and elsewhere which are particularly exposed to severe weather events and sea level rise provoked by humanity’s failure to address the crisis.  I sincerely hope that we will get positive outcomes from COP 26 and all these preparatory events.” 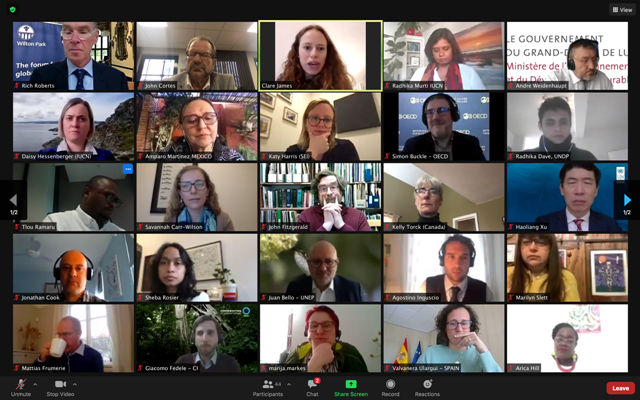