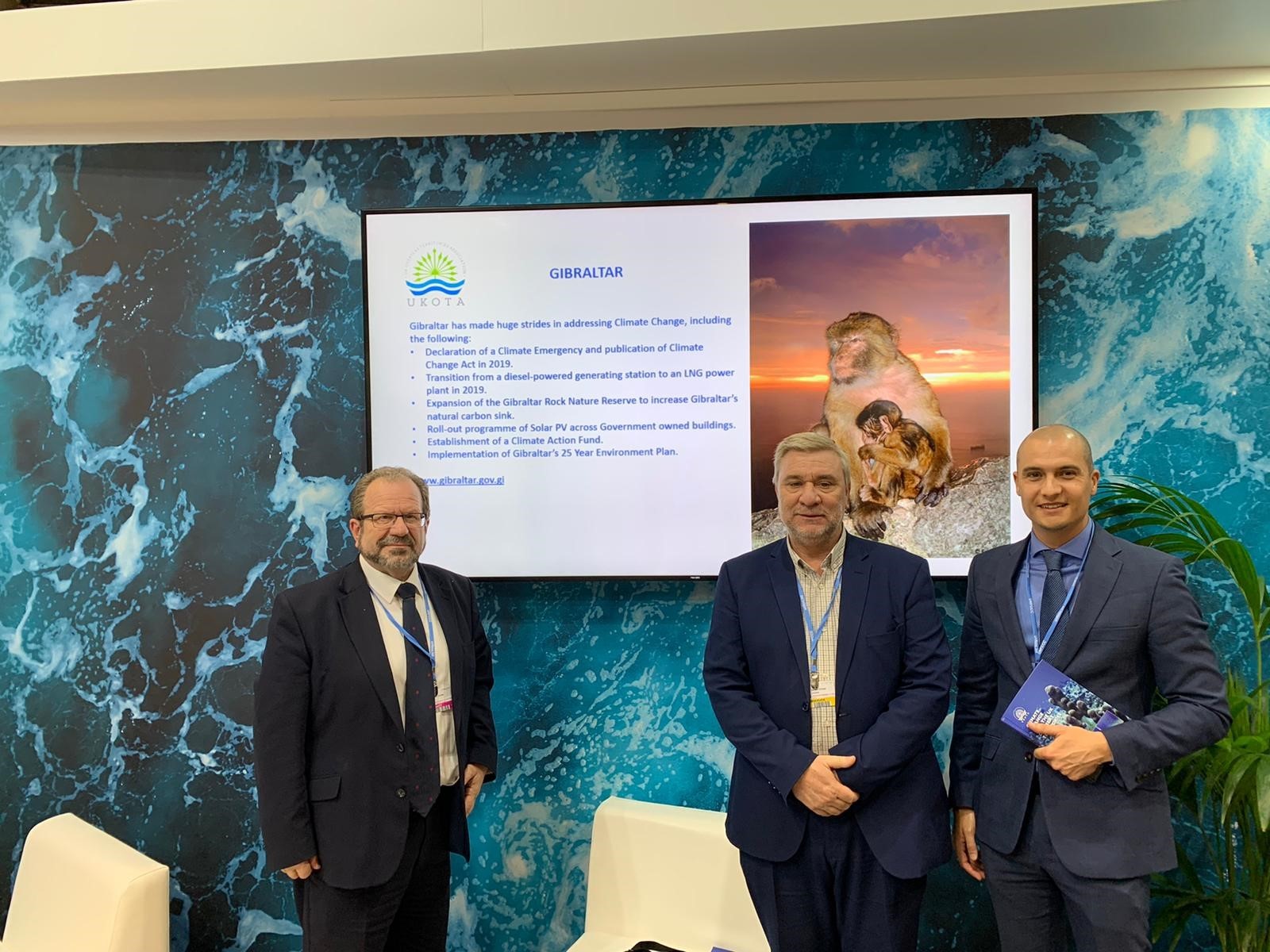 Minister for Environment, Sustainability and Climate Change John Cortes was at the 25th UN Climate Change Conference of the Parties (COP25) in Madrid last week.  As well as representing Gibraltar, he was there as the Political Lead of the UK Overseas Territories, representing the OT Governments in the UK delegation.  Dr Cortes was selected by the Overseas Territories Environment Ministers to represent them.  This followed intense lobbying over several years when the Territories were not represented at such international events.  He was accompanied by Stephen Warr, a senior scientist at the Department of the Environment and Climate Change.

Dr Cortes attended a number of events including the plenary sessions and hosted, together with Minister for Housing, Technical Services and Infrastructure, the Hon Steven Linares, a presentation on the Territories, including Gibraltar.  Steven Linares was at COP25 as a part of the delegation from Liberal International (LI) as part of their Climate Justice Committee (CJC) of which he is a member. Liberal International is determined to make Climate Change and issues concerning the environment an important part of its philosophy. The LI (CJC) held a number of meetings at the event to further discuss liberal principles in relation to Climate Justice.

Dr Cortes held a number of meetings during his stay at the Conference.  During the event he met the Chair of next year’s Glasgow COP26, Claire Perry O’Neill, former UK Minister of State at the Department for Business, Energy and Industrial Strategy.  Gibraltar will be working hard during coming months on its own Climate Change policies and hopes to  have a presence at the UN Climate Change summit in 2020, to be held in Glasgow.

Dr Cortes also held a meeting with Ambassador Dr Spencer Thomas,  Special Envoy for Multilateral Environmental Agreements of the Government of Grenada, who currently chairs GLISPA, the Global Island Partnership, where matters related to climate change in small littoral countries were discussed as well as possibilities for networking in the future.

Of particular interest was a session on sustainable cities where the challenges facing cities in reducing emissions from buildings and traffic were discussed and new technologies described.

Also of special interest were the discussions on Green Finance.  In this connection, Vikram Nagrani and Tania Rahmany, environmental lawyers at Hassans, accompanied Janine Galliano of the Department of Environment to various events at and around COP25, including the 10th Sustainable Innovation Forum. The delegation focused primarily on climate finance and carbon markets and engaged with a wide variety of stakeholders including various multilateral development banks, intergovernmental and international organisations, private actors such as insurance companies, verifiers and certifiers of markets, and innovators. Whilst the message from financiers was that they were increasingly able and willing to fund environmental and sustainable projects, deployment of funds was proving a challenge. Despite disappointment that the UN Member States failed to agree on rules to implement the use of international trading of environmental assets to reduce emissions, the leadership shown by the private sector in this regard was encouraging.

The purpose for the Gibraltar delegation attending was, among other things, to progress a particular HMGoG climate change trading initiative, potentially involving the use of blockchain technology, but the opportunity was also taken to learn about how Gibraltar can participate in and encourage the urgent need for individuals, families and small and medium businesses to assess how their lifestyle and choices impact our shared global environment. The Gibraltar delegation reported that the science-backed evidence shows that each individual contributes to the planet’s carbon emissions, and we need to be empowered to make the right choices and to act now so that we may play our part to safeguard our future as well as that of future generations and all other life with which we share this planet.

In addition, Professor Daniella Tilbury, Commissioner for Sustainable Development, was also in Madrid as a member of the University of Cambridge’s expert delegation and led a high profile event on behalf of the United Nations Economic Commission for Europe.

Commenting on his attendance at COP25, Minister Cortes said, “It was very important that Gibraltar was there, and indeed that the Overseas Territories were represented – and it was an honour to have been entrusted to do so by the Governments of the other territories.  There has been a sense of disappointment at the final outcome – precisely because it wasn’t really final.  While we haven’t gone back on commitments, some key decisions have been kept in abeyance till next year, with a great deal to do during 2020. I found that Gibraltar’s own work on climate change is up there with many of the countries best preparing to tackle the crisis, and will be a lot better when we are back at COP26 in Glasgow next year.  We need to take our place in the international community in our commitment to dealing with Climate Change.”