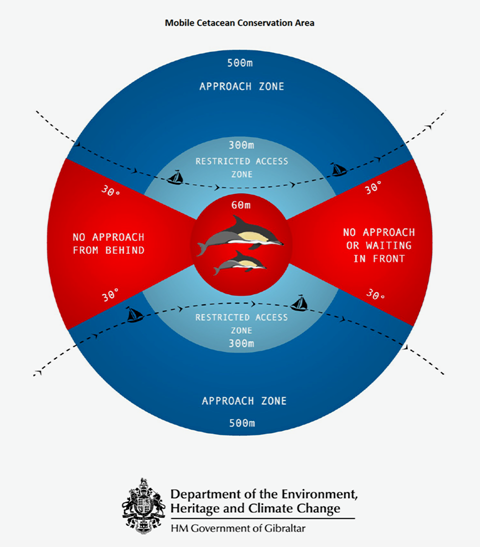 Reports of migrating Fin Whales, also known as Rorquals, have become a common occurrence in British Gibraltar Territorial Waters (BGTW) during this time of the year when these majestic animals are seen making their way to the North Atlantic Ocean. These sightings highlight the importance of our waters as a migratory corridor, not just for whales, but for a variety of marine wildlife such as turtles, sunfish, sharks and seabirds.

The Department of the Environment would like to remind all boat users of the need to be vigilant whilst navigating in BGTW and to respect marine wildlife by keeping a safe distance at all times and not interfering with any animals.

All whales and dolphins are protected under the Nature Protection Act and Gibraltar’s Cetacean Protocol introduced in 2014.   Under these laws, the free movement of cetaceans must be permitted in all directions by not intercepting their trajectory, cutting across their path, navigating towards or in close proximity to them. Vessels are required to maintain a minimum distance of 60 metres from any dolphin or whale whilst navigating in BGTW at all times. The Protocol also establishes a 500 metre radius from the animals within which vessels are only allowed to travel at no more than 4 knots or no greater than the slowest animal in the group. Further information on the Cetacean Protocol can be obtained from the Department of the Environment’s Thinking Green website http://www.thinkinggreen.gov.gi/uploads/biodiversity/2018-Cetacean_Protocol.pdf.

Loggerhead turtles are also strictly  protected and also occur regularly during this period when the animals are observed foraging or migrating towards the North Atlantic. Some of them can reach as far as the Caribbean and North America. They may sometimes be seen floating motionless on the surface basking in the sun. This behaviour is normal in Loggerhead turtles and the public is reminded not to touch or disturb the animals in any way. The Department’s Environmental Protection and Research Unit should called immediately on 58009620 for advice if an animal is believed to be in distress.

As the Summer approaches and the spectacle of migration continues, the Environmental Protection & Research Unit will be closely monitoring vessel activity to ensure that the requirements of the Cetacean Protocol are met and our flagship marine species protected from harm.